The history of artificial intelligence (AI) has been one of boom and bust. Periods of hype, exaggerated expectations and plentiful funding have been followed by periods known as “AI winters” – when funding for AI development dries up, and public interest wanes.

Beginning in 2012, the surge in interest in AI, and especially in deep learning, led to a dramatic increase in research funding and private investment. As deep learning has shown to be capable of solving problems that were considered to be very hard, such as machine vision, speech recognition, and difficult games such as Go, the attention and funding to this field has boomed.

At the moment, investment in the sector has reached historical highs, especially with the arrival of Softbank’s Vision fund, a venture capital fund, with its 100 billion dollars. Measuring by the number of papers published with “AI” or “machine learning” in the title, or by the amount of money invested, winter seems quite distant.

However, as the history of the field suggests, winter is likely to come sooner or later. Knowing when this will happen could be useful in guiding policy decisions, but also for predicting the pace of progress, assuming that progress in the field is somewhat correlated with the amount of funds and the number of researchers devoted to it.

Previous AI winters have been triggered by inflated expectations in academic results, and sudden backlashes when those expectations were not met. For example, in the early 1960s, there was much enthusiasm with the prospect of being able to create automated translation. In 1966 a report from the Automatic Language Processing Advisory Committee concluded that machine translation was more expensive, less accurate and slower than human translation. The US National Research Council, consequently ended all its financial support for AI-related projects. In a similar vein, research on perceptrons, an early version of neural networks, ground to a halt in 1969 after Marvin Minsky and Seymour Papert published their book Perceptrons, which was seen as highly critical to the research field.

“The boom and bust cycle in AI research has been related to social dynamics amongst academics and related institutions. However, we have reason to believe that the next AI winter will be different.”

In other words, the boom and bust cycle in AI research has been related to social dynamics amongst academics and related institutions. However, we have reason to believe that the next AI winter will be different.

First, research in AI is no longer dominated by government-funded research institutes. Rather, large private companies that can afford to pursue so-called “moonshots” play a much larger role relative to government funding than they did in the 60’s and 80’s (although Bell labs did play a significant role in earlier eras).

Second, AI is now prevalent in a large number of consumer products, from search engines to smart speakers and drive assist software. These applications work well enough to sustain public and private interest even if research funding on basic research would be slashed.

Third, research in AI technology is not concentrated in a few research groups at elite anglo-saxon universities, but widely dispersed.

Instead, current development of AI technology relies on massive investments from the private sector which often (with some notable exceptions) expect a return on investment. Whether or not this return will materialize depends on a variety of factors, including consumer interest in AI products as well as a competent workforce that can create products ready for the market. Both of these things are dependent on public interest being high. Thus, we can expect public opinion to play a more substantial role in causing or being a relevant proxy for the next AI winter relative to previous winters.

Public interest in AI, as measured by the number of Google searches for AI-related search terms, has increased rapidly in the last 10 years. This is true globally, although the interest in high-income countries (with GDP per capita above $40,000) has increased more and faster than in low-income countries. However, in stark contrast with the exponential increase in funding for AI companies and research, the increase in interest has slowed down considerably in the last few years. In high-income countries, the interest even seems to have plateaued during the last two years. 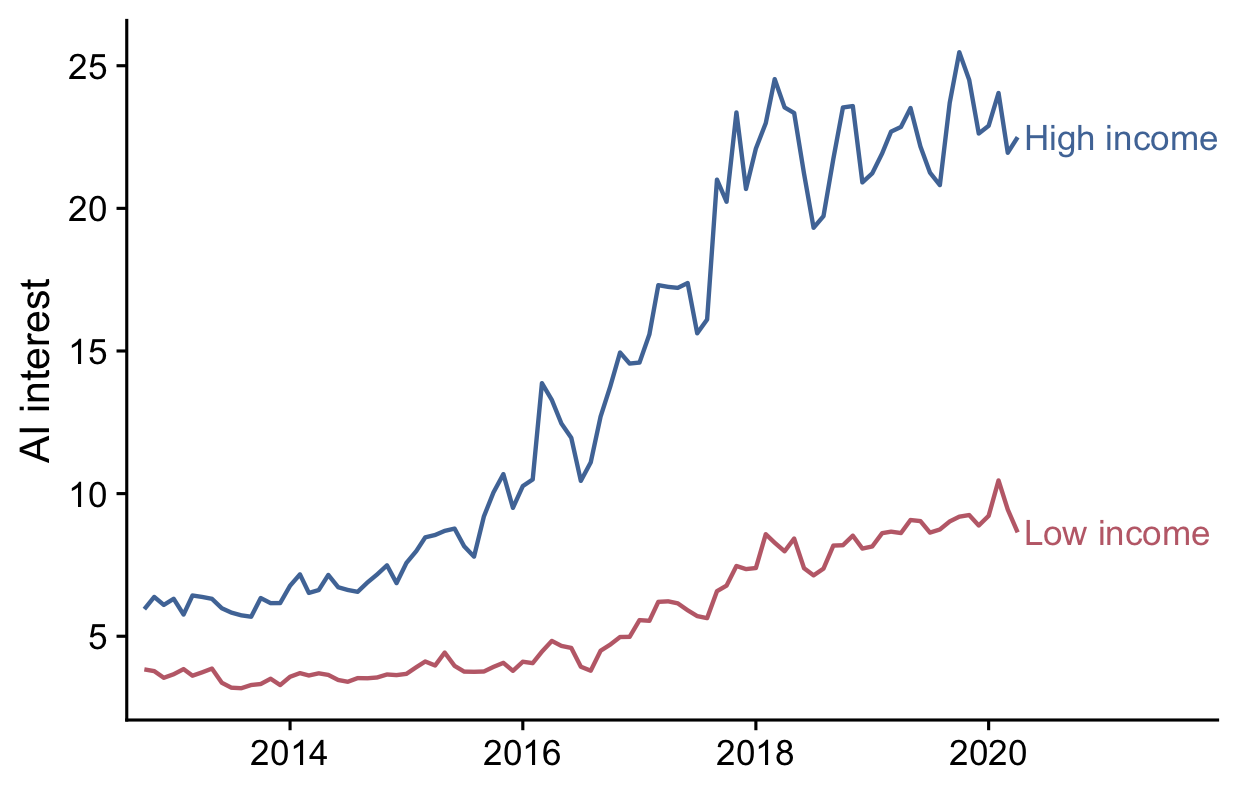 This indicator might not be enough to predict with certainty whether AI winter is coming but compared to other indicators it is certainly a first falling leaf suggesting that at least autumn might be around the corner.